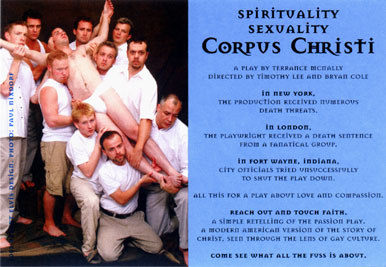 John Townshend from Lavender Magazine calls the cast of “Corpus Christi”, “One of the most impressive casts you’ll see on any local stage this year…”

Terrance McNally’s (Love, Valor and Compassion) controversial script is described as, “a passion play…The purpose of the play is that we begin again the familiar dialogue with ourselves: Do I love my neighbor? Am I contributing good to the society in which I operate or nil? Do I, in fact, matter? Nothing more, nothing less.”

Each performance was followed by a panel discussion with a special focus on Amnesty International’s program on human rights and sexual identity OUTFront network.