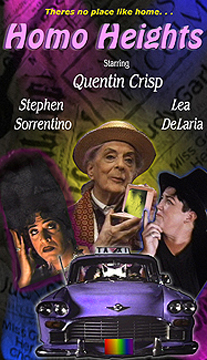 Homo Heights is a feature length narrative film that weaves farce
and satire with romance and comedy. It is a slice of gay life in cartoon
dimensions, with completely recognizable characters and situations
pushed to their limits.

In Homo Heights “The Donna,” Maria Callous, head of the gay mafia,
desperately tries to maintain control of his empire while his ancient
companion Malcolm hungers to be free of the Donna’s demands; Blanche
and Stella grapple with a relationship that is going nowhere – fast;
Tootsie and Cruise find a new addition to their wedded bliss; and
thirty something lesbian romeo Clementine realizes there could be
more to life than one night stands. Everyone is desperate to find
where they belong, where “home” is, and to help their beloved Malcolm
get the one thing he wants most, his freedom.