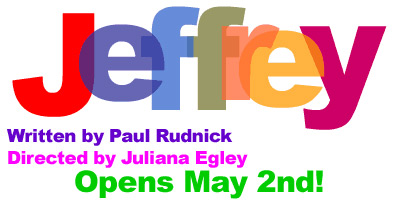 John played the role of “Steve” in Starting Gate’s production of “Jeffrey”… a comedy that proves abstinence makes the heart grow fonder! From the award-winning off-Broadway play comes an irreverent romantic comedy about one young man’s desperate search for love and happiness in the 90’s.

Jeffrey is a gay man so disheartened by the AIDS epidemic that he vows to give up on love entirely. Unfortunately, it’s not so easy to turn off your heart, especially when you’ve just met the man of your dreams.