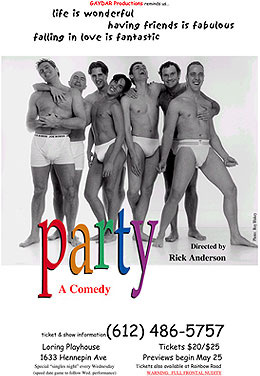 Director Rick Anderson took “Party!” to new heights in his production that ran the summer of 2001 at The Loring Playhouse. Anderson assembled the quintessential cast to surpass all stereotypes and bring humor and humanity to the characters of “Party!” The production played to consistently sold-out crowds and won rave reviews from The Minneapolis Star & Tribune as well as numerous local critics for both its cast and director. John Trones starred as “Kevin”, sharing the stage with an outstanding ensemble cast that included Chris Maltby as “Ray”, Jon Mikkelsen as “Philip”, Stephen Frethem as “Peter”, Jairus Abts as “Brian”, Joe Gardner as “Andy”, and Dustin Stephan as “James”.

“What the critics are said…”
“Gay men have become accustomed to the heavy clothes of mourning and grief; it’s time to toss off that costume and celebrate with outrageous candor the joy of being gay. Through ninety minutes, “Party” elicits belly laughs, hoots, cheers and even standing ovations… the seven cast members all hit their marks with aplomb.” -Jaime Meyer / Star & Tribune, June 6th, 2001