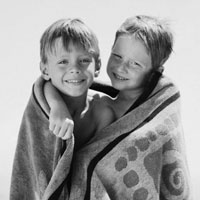 The Candy Ass Club
Were you always one of the last-picked kids in gym class? Did “Tiger Beat” pictures of David Cassidy arouse your hidden adolescent desires? Did you prefer figure skating to hockey? Home economics to shop class? Surprise! If you answered yes to any of the above questions, you might just be a CANDY ASS! Join us for a nostalgic look into this very exclusive members-only club.

Produced and directed by Gregg Peterson for The Early Stage

“Hilarious and Sweet!” by Hilary Miller: My fiancee and I went to see “The Candy Ass Club” this past Saturday and thoroughly enjoyed the show. From the TV sitcom songs and Jennifer Grimm’s peformance, to the realistic portrayals of growing up gay (at least from a gals perspective), it was that rare mesh of hilarious and sweet. For those straight girls that fell for one of your gay guy friends, this show understands that too! Performances from the whole cast were wonderful, especially the first purchase of the jock strap, prom night, and my favorite, the curtain call. Definitely would recommend this show to gay and straight alike! (Posted on Aug. 7)

“Can I join the club?” by scott mulert: This show is fantastic! One of the best Fringe shows I have ever seen, with great performances, strong writing, a witty sensibility, and a wonderful solo number by Jennifer Grimm. Gay men who came of age in the 80’s will feel as though they have stepped into their past (but in a good way). Aaron Gabriel is amazing as Andy, and John Trones – be still my heart. I desperately hope that Gregg and Aaron will give this the development that it so richly deserves. (Posted on Aug. 6)

“Wonderfully funny and charismatic.” by Naznin Nelson: I had such a wonderful time watching this cast! The scenes portrayed all the awkward moments of growing up candy ass with a great sense of humor and wit. See it and laugh. (Posted on Aug. 7)

“Fabulous – very talented cast” by Abigail Garner: I have seen this show twice because it is such a delight. It is also enjoyable because the crowd, mostly gay men, reacts so warmly to these true-to-life coming-of-age moments, like sleep overs when you want to kiss your best friend and prom night when you don’t want to kiss your date. Grimm’s song that she wrote and performs is very moving and deserves to have a future beyond this festival. (Posted on Aug. 8)

“nothing but 5 stars” by andrea mcvay: this show was so funny and heart warming – whether you are gay or not, if you are a child of the 80s it is a blast from the past. the performances are fantastic across the board, and if you can’t have fun at this show you need prozac! (Posted on Aug. 7)

“Funny and Charming!” by christina jansa: Beatifully written, witty, and just plain fun! One of the best fringe shows I have ever seen – a must see this season. Come early, a line was already forming a half hour before the performance! (Posted on Aug. 7)

“This Show Was Bitchin'” by Dave Harvey: I loved this show! So much so I saw it twice. All the actors had great comedic timing. Quite the trip back to the 80s, it captured growing up gay then oh so well. And bonus points for having a fully developed character in Missy. All too often female characters in gay movies, plays, etc. are not developed and kept two dimensional. Finally, the song Queer Condition …I still have it playing in my head. I had missed in the program the first time that is was written for the show by Jennifer Grimm. At first I had thought it was from a Broadway production and had been adapted for the show. This production richly deserves a life after Fringe. (Posted on Aug. 11)

“Best of the Fringe” by Allan Valgemae: I thought that I’d had my fill of growing up gay shows, but this one resonated like no other before it. I can only speak as a gay man who likes musicals, but this was the most enjoyable show I’ve seen in a long time (I even bought two of the cast members’ CD’s after the show–unusual for an old guy like me). I hope this ensemble comes together again soon. (Posted on Aug. 13)

“I would see this OUTSIDE the fringe” by Alexander D: It’s rare you can say that about a fringe show. Gay themed, but accessable to all persuasions. Worth seeing. Everyone gives a great performance, and sings beautifully. Wonderful show, guys+gal. (Posted on Aug. 7)