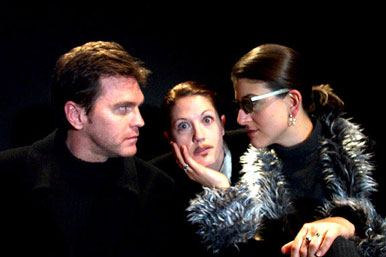 “Twelfth Night” is considered by many to be one of Shakespeare’s comic masterpieces.

“WHAT THE CRITICS SAID…”

Graydon Royce from the Minneapolis Star & Tribune said, “Director Matt Sciple’s choice to give his actors free rein is wise. Relationships seem crisper, and the strongly articulated characters coax refreshing clarity from the text. The timing is brisk, and the show is physically adept.”

Carolyn Petrie from the St. Paul Pioneer Press had this to say about the production, “Crisply envisioned, nicely designed…the production provides fair insight into this wonderful script’s sense of silliness and fun. Sciple’s modern production tosses in some contemporary fun. The count Orsino, played with solid machismo by John Trones, wiles away the hours playing on a virtual reality machine and woos Olivia with gifts from the Gap. The countess Olivia – whom Andrea Wollenberg brings to life in a vivid, wonderfully well-rounded performance – is never without her cell phone and her dark shades.”